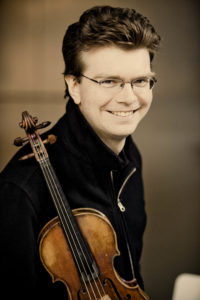 Violinist Scott St. John is the Director of Chamber Music at The Colburn School in Los Angeles. He leads the chamber music programs in the Colburn School’s Conservatory of Music and pre-college Music Academy. Scott is Concertmaster of the innovative ROCO Chamber Orchestra in Houston, Texas, and a frequent participant at the Marlboro Music Festival in Vermont. Born in London Canada, early violin success gave Scott a path to the Curtis Institute in Philadelphia and the chance to work with David Cerone, Arnold Steinhardt and Felix Galimir. After winning the Alexander Schneider Competition and playing a Carnegie Hall debut, NYC pulled Scott into its orbit, where Young Concert Artists gave him fabulous opportunities for performance. In addition to a magical year of working at the Disney Store in Times Square, Scott has been Associate Professor at the University of Toronto, and Artist-in-Residence at Stanford University as part of the St. Lawrence String Quartet. He has received an Avery Fisher Career Grant and won a Juno Award for recording Mozart with his sister Lara St. John. He has founded two chamber music awards for students: the Felix Galimir Award at University of Toronto and the Ida Levin Award at the Colburn School. Scott loves chamber music, Dvorak, new music, music by less-known composers, and a great espresso. He has been to all the Canadian provinces, 49 of the United States, and would prefer to travel by train when practical. He is married to violist Sharon Wei and they have a spirited daughter named Julia.