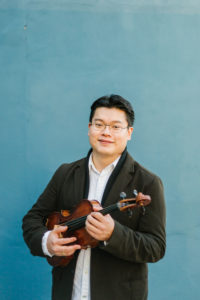 Taiwanese-American violist Che-Yen Chen has established himself as an active recitalist, chamber musician, recording artist, and educator. He is a founding member of the Formosa Quartet, recipient of the First-Prize and the Amadeus Prize winner of the 10th London International String Quartet Competition. Since winning First-Prize in the 2003 Primrose International Viola Competition and the “President Prize” of the Lionel Tertis International Viola Competition, he has been described by the Dallas Morning News as a musician who “played with silken finesse, and with elegant singers’ feelings for timing, shape, color and articulation” and by San Diego Union Tribune as an artist whose “most impressive aspect of his playing was his ability to find not just the subtle emotion, but the humanity hidden in the music”.

As a promotor for music of our time, Chen’s active commissioning with Formosa Quartet and The Myriad Trio has contributed significantly to the 21st century’s chamber music literature. Most recently the Quartet premiered Lei Liang’s Song Recollections; based on music indigenous to aboriginal tribes of Taiwan. Chen’s recordings with the Formosa Quartet can be found on EMI, Delos, and New World Records, and the Quartet’s current project, From Hungary to Taiwan, will be released with Bridge Records in the 2018-19 season.

A native of Taipei, Chen began his viola study with Ben Lin and went on to be a four-time winner of the National Viola Competition in Taiwan. He came to the U.S. in his teens to matriculate at the Curtis Institute of Music and the Juilliard School, studying with such luminaries as Michael Tree, Joseph de Pasquale, Karen Tuttle and Paul Neubauer.