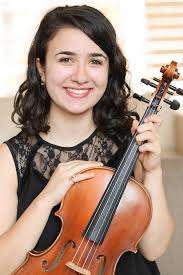 Violist Cara Pogossian is currently a junior at the Curtis Institute of Music, where she is pursuing her Bachelor of Music degree under the tutelage of Hsin-Yun Huang. Previously, she studied with Paul Coletti at the Colburn Music Academy, and also with Che-Yen (Brian) Chen. As a member of the Aurielle String Quartet, she is a Bronze Medal winner of the 2017 Fischoff International Chamber Music Competition. Cara was the Principal Violist in the Colburn Music Academy’s Virtuosi Chamber Orchestra, as well as the Principal Violist of the Colburn Youth Orchestra. As an avid chamber musician, she has frequently attended the Apple Hill Center for Chamber Music in New Hampshire, and has more recently attended the Taos School of Music, the Yellow Barn Young Artists Program and the Perlman Music Program, where she studied with Kirsten Docter and Carol Rodland. Cara has also taken private lessons with Kim Kashkashian, Misha Amory, Roger Tapping, Carla Maria Rodrigues, and Helen Callus. She is a 1st Prize Winner of the ASTA California State Solo Competition, as well as a 3rd Prize Winner at the Occidental College String Competition. Cara was recently featured on NPR’s “From the Top” radio show, performing Brahms’ Viola Sonata with the host Christopher O’Riley. As an AGBU Scholarship recipient, she performed at several high-profile concerts on the East Coast, including Toronto and at the Weill Recital Hall at Carnegie Hall in New York. Earlier this year, Cara performed a joint recital with her brother, Eddie, at Weill Recital Hall for the 36th anniversary of Musical Armenia. Committed to musical outreach, Cara has frequently performed at schools, retirement centers, and hospitals in the greater Los Angeles area, and is also an organizer of several Music for Food performances at the Montrose (CA) Farmers Market, raising funds for local food banks.